So, the other night, I lived “recklessly”….I went out on a school night…LOL, but the reason why was so worth it.  I went to see India.Arie in concert at the Paramount (yes, again).  I’ve been a lover of her music for as long as I can remember.  Her contribution to soul music is undeniable…I mean what music would be like without “Video”, “Brown Skin”, “Ready For Love” and so many more. 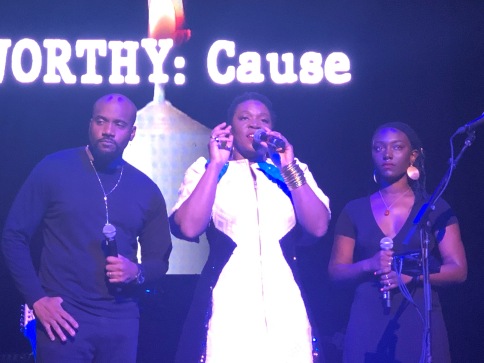 #SongversationWorthy was something I almost missed because Le Dude didn’t want to go.  I brushed it off as it was fine because I had seen her multiple times before but there was this gnawing that wouldn’t let up, so I looked for tickets a couple of days before the concert.  It’s important to note that the first time I looked for tickets that the VIP was sold out and even my frantic call to the box office wasn’t enough to shake one ticket loose for me to snag one.  So, I was prepared to sit in the back of the room or the balcony and just be in the room, but low and behold, one seat….in VIP no less, was available.  I couldn’t get my card information into the system fast enough.  So, there I was, Row A, Seat 6.

On concert day, I was excited….not overly…just ready to hear some SOUL music.  I went back and forth with what I was wearing so I left the house a lot later than I wanted to…factor in Austin traffic and you know I was sweating bullets to get there by 5:30 for the meet and greet.  I arrived with a few minutes to spare.

As we were escorted in for a sneak peek into her soundcheck, there was a different energy in the theater than I had ever felt when attending other events there.  So, there I was, front row center, when she pulls out her guitar and asks her band what she should sing.  Her drummer says “Good Mourning” and I smile.  In that moment, I was transported to the time when the cd was released and I was resigned to have a “listening party”.  So, I invited a few friends over and we listening to the music, raw…organic…and pure.  I still remember it like it was yesterday.

India starts strumming and the music starts and she opens her mouth….

In that moment, I was transported back to a space and time of when I first heard the song.  There I was divorced, raising 3 kiddos alone, in a job I hated, with a broken heart.  The more she sang, the more I fought back the tears and I begged for the song to stop and keep going at the same time.  The song ended to India.Arie admitting there was a different energy in the room.

We were let go from the listening session after 3 songs and we herded upstairs for our photo with India.  People around me were chattering but all I could do is stand there and let that song still wash over me.  To look at where I was when that song came out 13 years ago and where I am now is unbelievable.  My son was 15, my oldest daughter was 13 and the youngest was 11 and I lived life in fear.  Fear of failing….fear of not being enough…fear of eviction…the lights being off….being hurt…that’s how I lived for a LONG time.  Now the kids are all gone and grown and am living a life that I can be proud of.

The room was electric as we prepared for India.Arie…the two opening acts were AMAZING (more on that another day)! 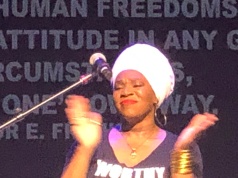 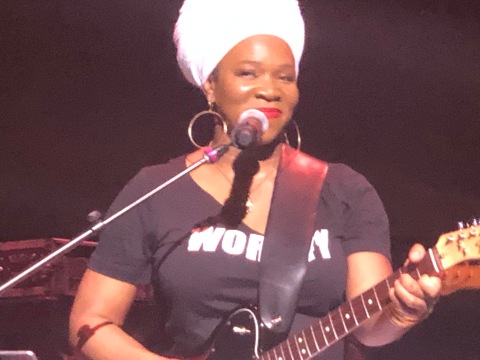 When she took the stage, I was transported in time and for a few hours I just was…in the moment, full of love, joy, and hope.  She sang the soundtrack of my life and I was open and I felt all the things and at the end I was chanting “India!!!” just like everyone else.  This was the concert that my soul needed.  I was meant to go to the concert alone so I could feel and I have been wide open and vulnerable every since.

If you haven’t seen India.Arie in concert in a while or ever….grab the girl gang or just your purse and head out the door to see her.  Oh, did I mention that she deemed me best dressed?  Yep…pictures soon come.

Just released today, one of my favorites from the new album, “Steady Love”…watch and smile, just like I did….let me know what you think.